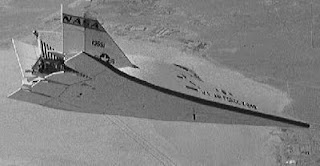 The X-24B was used by the US Air Force to explore the supersonic and subsonic handling characteristics of the FDL-7 and FDL-8 hypersonic configurations which promised to double the hypersonic L/D ratio of the original X-24A. It was air dropped from the NB-52 carrier aircraft and reached Mach 1.76 and 22,400 m altitude during its test program. By the time the test series had started the USAF had been forced to accept the NASA space shuttle for its future manned space ambitions and had dropped plans for a Titan-launched manned spaceplane.

The configuration was also applicable to air-breathing hypersonic aircraft. NASA and USAF proposed an X-24C, which would have been two new-build vehicles. These would have the XLR-99 engine from the X-15 and take the configuration out to Mach 8 and conducted scramjet tests in 200 flights. This follow-on project was cancelled for lack of funds (or replaced by a black project with Lockheed).