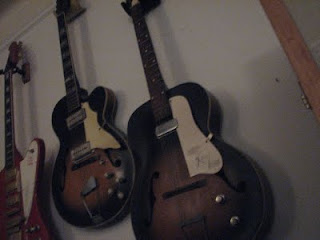 Dave Madden wrote what was for me a nicely thought-provoking review of my little CD for The Squid's Ear.

In a dedication to Derek Bailey, Squid's Ear contributor Kurt Gottschalk wrote "...music in the 20th Century was the breaking down of the idea of musicianship; expressiveness surpassed finesse as the reason for playing an instrument." On 24b, he puts his hands to guitar - and feet to pedals - to offer an exciting example of this ideal.

For nearly an hour (split into two programs), Gottschalk patiently works through the fringes and cracks of his instrument's potential, oscillating between delicacy and strength while leading the listener down a through-composed / improvised wormhole. The introductory light scrapes and plucks of "Bluely" come out dry but, after a short pause, their delay yields various flavors of distorted reverberation, pre-amp dominance, just-until-the-point-of-pain saturation and microtonal inflections. Eventually moving into a violent, flanging, punctuated display, Gottschalk tangentially shifts by stripping away all effects in favor of tinkling non-fret board methods (i.e. behind the nut), liquid echoes, sloppy "Eastern" scales, rattling objects on strings and healthy servings of silence; from here he toys with twanging intervals and distressed sawing before submerging into a multi-octave wall of sludgy Metal postures and tape-mangling feedback.

Certainly, you've heard all these descriptions in reviews of other non-guitarist's musics (i.e. Otomo Yoshihide), but Gottschalk puts his stamp on the genre in a variety of ways, one such being his ability to create the impression of an ever-augmenting - then diminishing, then augmenting from another perspective - ensemble. In conjunction, the stereo field plays a vital role in the success of this music. He carefully nudges the shadows (panned left) of his performances (panned right), distancing their relationship, stretching and merging the seams into a cerebrally separate, eye-twitching (in a good way) experience, like a mirror whose image often magically frees itself from its host; at a glance, the reckless, grungy "Wide Eyes / White Eggs (for Georges Bataille)" is a mono endeavor, however a few moments of concentration and movement around your listening plot reveal underlying strata of stark, non-affected twitches and psychoacoustic eccentricities. In other words, Gottschalk capably animates his instrument and recordings with slight of hand to a point where you lose track of internal semantics, what is manipulating what - the chicken and the egg, so to speak.

Temporarily putting aside his role in the Country and Blues (a loose version of it, anyway) outfit Ecstasy Mule and other tenuous groups, Gottschalk's solo warts-and-all physical and mental explorations of "learning, unlearning, then learning again" make for an arresting abstract smear.

The 1959 Kay archtop guitar in the foreground of the pic above is the one I made the record on. In case you wanted to know.
Posted by Kurt at 12:01

I love Kay guitars! All of them.