At first it was a CD
of Shostakovitch quartets
nos. 10, 13 and 14
on replay until I switched
to a sequence of all Derek Bailey.

The sentence keeps repeating in my mind:
"My father's dead." Those three words as
a statement of fact, as if my brain were trying
to convince me. I am not without remorse,
but my brain is dealing with nuts and bolts.
"Do not forget: Your father's dead."

Tonight at a recital of piano music of György Kurtág,
a 90-second song with a libretto taken from
a Hungarian turn of phrase. "We are only flowers,
mere flowers." William Parker too sings of flowers.

My brain is not yelling at me. It is speaking softly,
if insistently. It senses I am working to distract it
and is worried I'll forget that my father's dead.
And so it must, it thinks, repeat: Your father's dead.

The delicacy of Kurtág's
"Homage to Verdi: Caro Nome,"
four hands playing what two,
indelicately, could do;
The amplified and distorted delicacy
of Derek Bailey's guitar.

In truth my brain is
taking pity on me,
doing the best it can
to keep me in check
without upsetting me.
We are only flowers,
mere flowers. 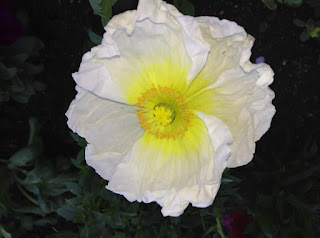 Thanks to Katherine Stephens for the photo.
Posted by Kurt at 01:51 1 comment: