2 Performances in which I won’t perform, a story for Valentine’s Day and a humble plea for support

I hope you all have plans for this shortest month Black History Valentines, eh? The weather sure has been what one expects for this time of years on some days and then not on others, eh? Especially in the area you live! And how about those sports games? Pretty exciting! On a more personal note, I’m sorry about that situation that came up at your school or place of work. I agree that your cohorts weren’t being fair with you about the whole thing.

Have I mentioned some exciting news to you already? No? Well, I have two performances this month and the best part is I won’t be performing in either of them! 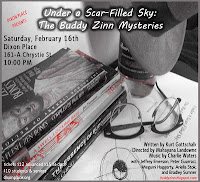 On February 16, my play Under a Scar-Filled Sky: The Buddy Zinn Mysteries will be staged at Dixon Place in Manhattan’s storied Lower East Side. This is very exciting because 500 days ago I didn’t even know I was a playwright. But after a lot of work and the remarkable support and encouragement of co-producers Kristen Persinos and Urania Mylonas and director Mahayana Landowne, it seems this thing is on its way to becoming a play. Which is good news because we told Dixon Place that it was. We have a fantastic cast (which includes live music from Charlie Waters) and are hip-deep in rehearsals.

Which brings me to another point. We can’t really afford rehearsal space, not to mention costumes, props and subway fare. So please, if you’ve not, have a glance at our Indiegogo page and consider pledging your cash money love. You will get books, CDs and cocktails in evidence of our gratitude, which also you’ll receive.

The second performance I won’t perform in this month will be The Audience vs Ecstasy Mule vs John Cage vs Ecstasy Mule vs The Audience on February 24 at Willow Place Auditorium, 26 Willow Place in Brooklyn Heights as a part of the Transient Series. This will be a logical extension of Ecstasy Mule vs John Cage vs Ecstasy Mule, a performance construction situation based on a half dozen or so John Cage scores which was performed in September at the Stone and then in December in the RipRig series in Philadelphia. For this iteration, Len37 and myself will be sitting on our asses doing nothing while the entire audience figures out how to play it. Really! It’ll be fun! And it’ll be free.

Meanwhile, and less specific to the metropolitan New York area, the next of my holiday stories is posted at Lulu. As some among the more faithful of you may recall, I am working on a book of holiday tales and am posting some of them along the calendrical way. Toward the end, “The St. Valentine’s Day Mackerel” is now available for your entertainment for less than a ride on the bus.

Lastly – not forever, just for now – I’ve posted a new track over at SoundCloud. It was an experiment that went awry, a sketch for something that will happen next month. The first person to guess the source material will get a factory sealed reward carrying a Manufacturer’s Suggested Retail Price of greater than $10.

As always, if you’re getting this crass commercial mass email and we haven’t talked in a while, get in touch! And, if you’re getting this and we have talked recently but you want to talk some more, get in touch! And if you don't want to be in touch, just say so! But mostly if you can, please come to Dixon Place on the 16th.  A strong showing there could help us get a full and proper run, just like the theater folks do!
Posted by Kurt at 10:49 No comments: