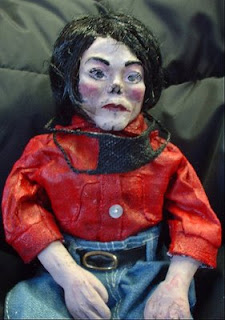 Back in 2005, when Michael Jackson was cleared of charges that whatever we believe we don't really want to talk about right now, I was co-hosting Radio Squidco at free103.9. I did a two-hour live mix tribute to MJ called "The Emancipation of the King of Pop." I was happy he was found not guilty. I don't know what the hell went on in that house, but it seemed a lot better than "guilty."

It took some digging to come up with it. Which means I had to email my friend Kristen because I knew she had a copy and she had to dig it up. Thanks, Kristen.

I don't remember what a lot of the things in this mix are anymore, so sorry to whoever's sounds I lifted. I think I gave you credit four years ago, but it's not posted anymore.

The mp3 is right here.

And man, I took a little heat at WFMU's Beware of the Blog for writing something slightly about MJ over there. So I'll just say once and for all, I am not hating on MJ. I like some of his songs.

Creepy MJ doll by someone named Susan.
Posted by Kurt at 02:15