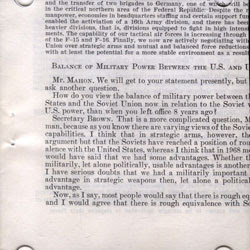 Man, this blog is not in any order or anything. Like, I should be saying Ecstasy Mule will be all doing the Make Music New York this Sunday, 7:30, Ring Garden, Dyckman and Broadway, Manhattan. And I should totally be saying Vacant (my duo with Jen Mesch who hails from Empire, Michigan and how awesome a name for a town is that?) will be at Temple M July 5. Scroll down for that stuff. I already talked about it. I mean, scroll down if you want.

And scroll down for free stuff, like the short track "A Difficult Fortnight" and the long track "A Day in the Night." Those are both down below here too. I didn't mean for them to both have "night" in the name. I do like nighttime, tho.

And I've already posted about my solo guitar CD 24b as well. So why am I writing now? Pretty much because Squidco scanned the cover, or one of the covers, so I stole the image to put up here.

By the way, I made the covers from a copy of the 1976 military defense budget hearings. People ask about the cover more often than they ask about why the guitar is all distorted and messed up sounding.

So yeah, you can get the CD, CD-R, really, with a cover similar to the one pictured here, from Squidco or Downtown Music Gallery. Or from me, one way or another. Brucey at DMG wrote a nice review about my little record, too. Nepotism is a friend of mine.
Posted by Kurt at 01:59