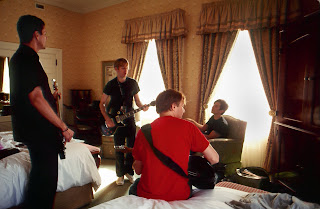 Do you reread them?

always, I try to archive anything I run across. Google Alerts helps.

Not really. Sometimes I have noticed writers not really grasping certain aspects of our approach. I have noticed that when taking a more subtle approach it is more likely to be misinterpreted; a number of our songs are very blunt, and those seem to be understood better.

Not really, though there a couple of writers I make sure are kept off our promo list. I am not interested in giving writers who have no interest in us a promo copy they will instantly sell.  Just because someone is an "important" writer on every publicist's promo list doesn't mean they should get a copy.

I've felt like responding a few times but I don't think I ever did. I think about contacting people when they've gotten something egregiously wrong, or are condescendingly mean, but I've also written reviews in zines over the years myself, so I know it's futile. Once it's written, it's over.

There are some sympathetic reviewers, yes. Even if their viewpoints might be different than mine, I like reading them because many have followed us for a long time and sometimes have interesting insights.

I don't think so. Perhaps it would be an issue if we were getting coverage at a more mainstream level.

Yes, I can recall various times where the interviewer was trying to lead me into saying something, to try to steer me in a specific direction, put words in my mouth.  No specific examples come to mind--it's not something I sit and worry about--but you have to be especially careful with the Brits, they love pitting musicians against one another.

I wrote in various fanzines and magazines from 1977 till just a few years ago. I often used a pseudonym after I started playing in bands, so I could do both without having it reflect on my band or my bandmates.

I think it used to be better, because in the past there were more bands worth writing about.  The coverage carries on regardless of whether the music is worth hearing or not. I mean, my god, there are a million articles on Radiohead, it's so fucking boring. Do you really want to read more about Animal Collective, or Devendra Banhart, or find out what Thom Yorke is doing today? zzzzzzzzzz...