100 Carpenters and a Dancer 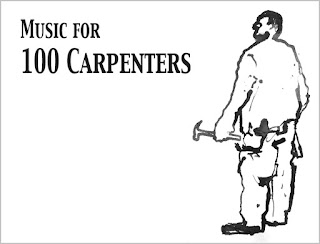 I'm toast excited about two things, or three depending on how you count, coming up this month. First, on Nov. 7 and 8, I'll be one of the section conductors in Doug Henderson's composition for 100 Carpenters. The official words go like this:


Music for 100 Carpenters is a theatrical surround-sound music performance, enlisting 100 skilled and unskilled tradespeople. Prying at Stockhausen’s convolution of rhythm and timbre, 100 hammers, 100 blocks of wood and some 10,000 nails of varying sizes are brought to bear in a real-time, real-world articulation of complex computer synthesis. Under the guidance of job supervisors, thousands of hammer blows become waves of tonal murmur, threaded with rustlings of nails and occasional snarls of righteous indignation. The performers are organized into work crews with lists of tasks and closely timed schedules, and arranged in a circle around the audience. Toolbelts, sweat and lunchboxes are part of the score. For the installation phase, a bird’s eye view of the performance is projected on the floor, with the debris from the show left in place, accompanied by a superbly detailed six channel surround sound recording. 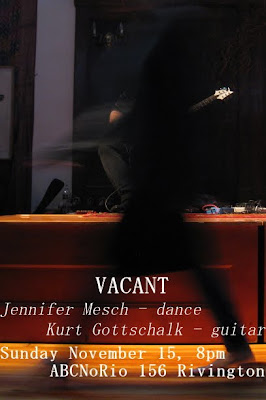 Then, on Nov. 15, Vacant will make its possibly awaited return. It's Jen Mesch dancing and me playing guitar. We might be doing something like the Carter Family or The Doors or Lead Belly or Bob Dylan. Probably not Bob Dylan. Oh, god, no, remember that Twyla Tharp Dylan thing? Christ. OK, we probably shouldn't do Dylan, even though it would have worked in pretty well. Anyway, that one will be at ABCNoRio, 156 Rivington, in Manhattan, at 8. Sax looper Frank Wilson plays first.

what does "toast excited" mean?