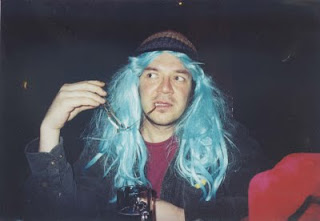 Mistress Katherine is the benefactrix of my show on WFMU (returning to the airwaves this Sunday at midnight), and is a relentless questioner of my actions and motives. She wrote to grill me about these "High Bias" interviews, and I thought I'd answer here.


Has anyone ever said your review changed the way he approached his work?

No, but musicians have asked my opinion about what future directions or career moves they should consider.

Has anyone asked you to review his work?

Has anyone ever written to you about your review of his work? What sort of responses have you received?  Were you surprised by their reaction?  Did they change the way you write your reviews?

I have occasionally received notes of thanks. I don't recall anyone contacting me directly about a negative review. I have had artists take offense at factual errors, or sometimes what they perceived as factual errors but really amounted to semantic hair-splitting. Over the years I've learned to write less opinion and more context, but I don't think that has much to do with the reactions of anyone in particular.

Has anyone ever asked you not to review his work?

One musician made that request to the editor of a publication I write for. He later bummed a cigarette off me, so I think that hatchet's buried.

Have you told a friend that you couldn't review his work because you are too close to him?  This question is more interesting to me posed to the music reviewer.  Have you had a friend upset with you for not wanting to get involved "promoting" him?

I've never had the conversation. I assume there's cases where it's clear and understood, and some where it's less so.

Has an artist ever accused you?  The question you asked the artists - if they ever felt a writer was trying to get something out of him, or get back at him, or had some ulterior motive in what they wrote.  It sounds like there is a story behind your question.

No real story. But I do wonder a lot about the lines. There are musicians who I like quite a lot and who I am friendly with. I try not to cross what I feel to be lines, but I feel like I exist in an enormous gray area.

When I was doing "straight" journalism, local politics at local papers, the lines were very clear. But in a small, global arts scene it would be weird to be unfriendly or overly formal. I guess that's what prompted me to do this to begin with.
Posted by Kurt at 14:11

Would you be willing to answer the questions you've posed to other artists? I mean, you, as the artist answer concerning reviews of your music.

Ha! Thanks for your undying confidence in me, Kathy. There have hardly been enough reviews of my work to merit my pontificating, though.

As for context vs. recommendation, I rarely write negative reviews. I think it's really hard to articulate a reason why a record might be less than what one might want in an intelligent way, beyond just "Uh, I don't like it." So I consider the fact that I'm reviewing a record at all a sort of tacit recommendation.

But more to the point, I don't think my opinions are the most interesting thing I can write about. If I can intelligently describe a record in a way that a reader thinks "I'd like this" or "I'd hate that" (rather than letting the reader know whether or not I liked it myself), then I've done my job.