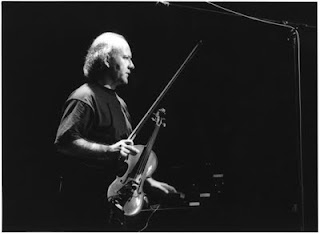 BIO: Born in Lisbon, Portugal. Undertook classical music studies from an early age – violin, pipe organ. Degree in Stage Design Studies at the Lisbon Theatre High School. In the sixties is a member of the Lisbon University Chamber Orchestra, becoming a professional musician at 14 years old. Forms Plexus in 1967, the only Portuguese group at the time to have developed a new musical approach based on contemporary music, improvisation and “rock”. It records a 45 rpm for RCA-Victor in 1968. From 1975 on, begins performing with some of the most important international musicians of free music and improvisation. Is invited to the Wrøclaw Technical University - Poland, and the Creative Music Foundation - Woodstock / New York. Performs at some of the world’s best known music festivals and has about 60 records out, both under his own name and with some of the mentioned musicians’ projects. Is a multimedia artist, founder and president of Granular – a musicians / experimental artists association in Lisbon.

I use to say that I’m my “worst” critic as I’m frequently tough on myself... This meaning that it is very important for me a constructive and analytic review of my work, as I always learn something. Not necessarily to change ways to proceed but mostly as self analysis of what I’m doing or what kind of changes could be introduced. Unfortunately they are very rare the reviewers who have a profound knowledge of historical and aesthetic approaches on writing on a concert or a recording... Most of the times, and understandably because of editorial directives, things tend to be very brief or mostly based on “fait divers” rarely pertaining to sound and music and art making...

A lot... Always curious how some good art reviewers, or literature reviewers could relate to a live sound event or a recorded one! Alas, this rarely happens nowadays as art critics are mostly unaware of what’s happening with music/sound contemporary experiences, unless when done by visual artists...

Yes... I’m proud we are friends – they are capable of knowing me and my motivations better than most - but worry about their writing being biased or, mostly, perceived as biased by others.

Some might consider that, writing about someone might get them into some more prestigious platform and so, helping to their curriculum and future image. But this is mostly when the artist is quite famous or about to be a system power icon. I never became such so, I’m of no interest for self promotion...

Nope... Only when asked by some fellow artists to write some comments or some letter of introduction, and this is quite rare. When a teenager in the 1960’s, I wrote some stuff on the Beatles – I was much more into the Stones or the Yardbirds and such – and got such a negative reaction that I learned the lesson...

To begin with, the amount of records coming out everyday does not allow for a profound analysis of their content if even a single line mention. The fact that new or experimental music is just a small fringe on the media and mostly covered by hard working militantism, does not help for a wider evaluation of what’s going on. So, not that much a question of “better or worst”... Just a question of presence and integration with other art forms. Are there as many new music publications as, let’s say, 30 years ago? I don’t think so... More and more music magazines are disappearing, and more and more things are being written on the web. This could be good – problem being that, with the huge amount of web offering, only the truly believers and militants will keep on reading about what concerns their musical choices.