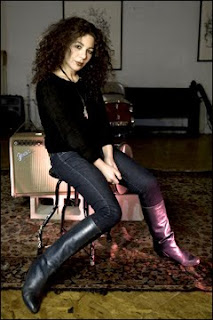 Right now, still reeling with shock, I am trying to (and failing to) think of anyone I've ever known who gave as much of herself for other peoples' art as did Suzanne Fiol. She was a talented photographer as well, but she had a vision of a place where experimental music, film, theater, performance and visual art could co-exit. And really, it's ridiculous that there wasn't such a place before she took over a windowless storefront in the East Village owned by Issue magazine and began booking shows there.

Suzanne saw that vision through disputes with the magazine, with landlords, and through three locales, working to the end to make Issue Project Room one of the most important art spaces in town. Her lasting memorial will be the space's permanent home at 110 Livingston, slated to open in 2011. Go see shows there, donate to the building fund, and let them know there is much support to see them through.
Posted by Kurt at 19:27