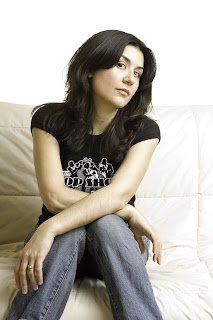 BIO: Playing guitar has led Amanda Monaco to perform at the Blue Note, The Kennedy Center for the Performing Arts, Birdland, Tonic, Joe’s Pub, and the JVC Jazz Festival, as well as other venues in the United States and Europe.  Amanda’s quartet Deathblow (with Michael Attias – alto and baritone saxophones; Sean Conly – bass; Satoshi Takeishi – drums) combines free-bop sensibilities with through-composed pieces equal parts textural, adventurous, and whimsical. Deathblow performs a mix of Monaco's original compositions and modern twists on classic and obscure jazz repertoire. Monaco’s latest CD, I Think I’ll Keep You, was released on LateSet Records in October 2009 and is available for download from iTunes, eMusic, and amazon.com. As an educator, Amanda has served on the faculty of Berklee College of Music, New School University, and the National Guitar Workshop and is the author of Jazz Guitar for the Absolute Beginner (Alfred Publishing). A former student of Ted Dunbar, Amanda graduated in 2008 with a M.A. from The City College of New York.

- not really, though I get really annoyed when I’m misquoted.

- at some point I would like to reach out to the publications that focus on women’s interests because jazz can be seen as such a man’s world, you know? And maybe if there was an article on a female jazz musician it could introduce women in music (other than pop) to a wider audience. I am fully aware of the fact that this could totally backfire, but it’s something I’ve always thought about in terms of getting jazz back into the mainstream a bit more.

- Yes. Yes. We became friends after they wrote about my work, and I value their opinions.

- Yes. Well, he’s my husband and I think that it’s ok that he doesn’t want to write about me. He will give me an honest opinion off the record, though, which I truly appreciate.

- Once there was a journalist who saw my essay about the ups and downs of being a female musician and wanted to ask me why I was so “angry”, which only proved that he just didn’t “get” it and was one of those chauvinistic idiots who liked his “girl musicians” demure as opposed to real.

- I’ve interviewed Kenny Barron and reviewed a few CDs for AAJ-NY. I don’t write about music very often, but I enjoy writing about music and enjoy reading about it as well.

- I think it’s abhorrent that some jazz journalists think that the music can’t survive without them; furthermore, it is disgusting that they take the promo CDs they receive and sell them on eBay; that hurts the musicians financially.

-  Nothing I can think of right now.