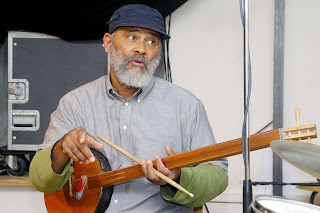 Yes.Yes.Yes. I have used quotes only once that I can remember. It was a pamphlet for a performance and workshop. It was never distributed. More often reviews document the where, when and who with.

Years ago I remember a writer talking about the difference between performances in clubs as opposed to concerts on stage in larger venues. The presence of alcohol or not being an important factor in how a performance is presented.

It's not something I give thought to.

Yes I did one time. It was to inform the person that his negative comments were misdirected. We the musicians on the recording had no control over what tracks released, or how they were recorded mixed and mastered, or the final order of the tracks on the CD. The problem was not with the musicians but with the producer and the label. I wrote to inform.


Are there reviewers who you consider to be your friends?

I consider you a friend. It has nothing to do with your writing about me or anyone else. You are one of only two people that I have met in NYC in the past 25 years who ever offered and gave me a ride home after a gig. William Parker was the other one. With all my stuff it can be very difficult to make a gig. It usually always cost me more than I make on a job. That impressed me because I am from a place where people with cars always offered ride to people with none. Maybe that has changed but it is what I remember as being proper behavior.


Do they write about your work?


How does that make you feel?

The more I appear in the press the more likely I am to work. That makes me feel good.

But I see that as a writer's problem. I am much more critical of what I and those around me do than any critic can be. I hear everything, good and bad, in tune, out of tune, sloppy playing, forgetfulness. I appreciate truth.

No. I am not a consumer of music.

I don't know if the journalism is any better or worst. There seems to me to be a problem with the core quality of the music performances I experience. Too few venues and venues that confine bands to one set. I grew up hearing bands playing multi-sets nightly. This helped educate the listening ears and enabled musicians time to develop in ways that do not happen in rehearsals or from practicing their instruments.