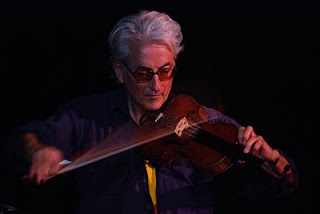 BIO: For over 35 years, Jon Rose has been at the sharp end of experimental, new and improvised music. Central to that practice has been 'The Relative Violin' project, a unique output, rich in content, realising almost everything on, with, and about the violin - and string music in general. Most celebrated is the worldwide Fence project; least known are the relative violins created specifically for and in Australia.

In 1977, he started Australia’s first musician run collective for the promotion and recording of improvised music – Fringe Benefit.

In the area of interactive electronics, his work is considered exemplary, having pioneered the use of the MIDI bow in the 'Hyperstring' project in the 1980s with the Steim Institute, Amsterdam - and with whom he continues to collaborate often in interactive projects involving sport, games, or the environment.

Apart from Europe, considerable interest in Rose's output currently comes from California where he was awarded the David Tudor Residency at Mills College in 2007 and completed a concert and lecture tour of all the major UC campuses.

In 2002 he set up the Australia Ad Lib website for the ABC – an interactive guide to the wild, the weird, and the vernacular in Australian music.

Recently Jon Rose has been commissioned by the Kronos String Quartet to write and build “Music from 4 Fences” for the Sydney Opera House; realised his bicycle powered “Pursuit” project at Carriage Works, Sydney; performed a completely new and improvised solo part for the Tchaikovsky Violin Concerto with the BBC Scottish Symphony Orchestra; created a major radiophonic work for the BBC on the history of the piano in 19th century Australia; toured in Europe with his current improvisation group 'Futch'; premiered his interactive Ball project at The Melbourne Festival; and been apprehended by the Israeli Defence Forces at the Separation Fence near Ramallah in the occupied territories; performed his interactive multi-media composition “Internal Combustion” for violin and orchestra at The Philharmonic, Berlin.

In 2007 he gave the Peggy Glanville-Hicks address - Listening to history: some proposals for reclaiming the practice of music. It has been published in over six journals, including The Leonardo Music Journal of MIT Press.

He holds 3 passports, one of which declares him a 'Berliner for life'.

When I get sent them.


I put them on my website under Press...so when concert promoters ask for press...it's there to grab. I am partial to the really bad reviews.

No, it just means I stopped reading the Wire a long while ago.

The writers who have some media power and write the history of experimental music seem to carry the same aesthetics in their bag, I'm not part of that club. And as Groucho said "I wouldn't want to belong to any club that would have me as a member".

In the book "Violin Music in the Age of Shopping" - a certain jazz critic was taken to the cleaners. In 1980 I did ring up a reviewer from the Adelaide Advertiser who had by misfortune been told to review my concert when he was programmed to review a choir singing madrigals. He clearly was out of his depth - so I rang him to help him through the hoops. At first he denied writing it, then, when pushed, said "Look I don't mind modern music, I like the Beatles!" I haven't bothered since then.

I have no reviewing friends that I'm aware of.

No that never happened...but people have written to me to say positive and negative things about my work, but no critics that I'm aware of.

Possibly reviewers don't like it when musicians write as I guess they think of it as crossing into their territory.

I have written (with rainer Linz and some 8 other anon authors) two books "The Pink Violin" and "Violin music in the Age of Shopping". I write a lot of stuff about the violin, improv, music history, strings, electronics, which can be found on my website. I occasionally submit stuff for publication, not the Wire as it's clearly a little club of back scratchers anxious to keep the history of music for themselves and their mates.

You will never get writers with the passion or knowledge of Mann or Adorno ever bothering with music again. Music lost its power and place in society when the notion of a professional musician became extinct. Now it's just celebs, minor celebs, or wannabes, talent challenged ex pop stars, and downloads.

No, but feel free to quote from that article - it remains current somehow.
Posted by Kurt at 13:31