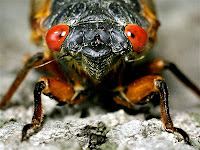 UPDATE: If you don't live on Brood II turf, I will also accept recordings with other insects! Now lick out the bug jams!
UPDATE: The broadcast on Miniature Minotaurs on WFMU will be June 21, the first day of summer.

I want to hear you sing with the cicadas! They're out in DC and starting to emerge in Jersey. From what I've been able to discern there's little agreement about where they'll be in NYC. Definitely Staten Island, maybe the north Bronx. Some say Central Park is possible, though most say no. But we do know Brood II is huge and will be singing around the Northeast for a good part of June.

So I'm asking you to jam with the bugs and help them celebrate their 17-year itch, then send me the files for future broadcast on WFMU. The only rules are:

1. Start with your own original cicada recordings. Collaborations with other humans is OK, of course, but I want you to go out and have an insect interface. You can take your axe with you, or lay a vocal or instrumental track over it later, or record and remix as you please, but please, go out and meet your collaborators.

2. Include the process with the submission. Tell me where you made the cicada recording and what your part in it was (instrumentation, multi-tracking, etc.). Also tell me how you'd like to be identified publicly. If you're interested in only doing field recordings, let me know and I'll try to match you up with someone to remix. But right now I'm not looking for straight field recordings to broadcast.

Send your files and info to miniature.minotaurs @ gmail . com

I'd like to have most of the submissions by June 15 or so. I will take them later but they might not be included in the big cicada showdown on WFMU's Miniature Minotaurs.

Also, check out the Cicada Tracker at RadioLab. And you can listen to my interview with David Rothenberg, author of Bug Music, here.
Posted by Kurt at 14:41