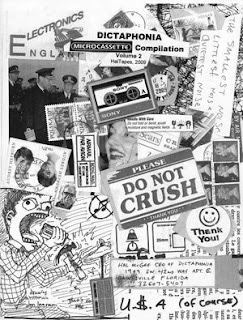 Microcassette comp with a track by yours truly, made by putting my microcassette recorder in my grandfather's saxophone and playing as quietly as I could while the news played on the radio.

Go to this page on my web site to listen in streaming audio and download individual mp3s of the tracks on the Dictaphonia Microcassette Compilation,​Volume 2:

I offer two versions of the mp3s, one at 320 kbps for high speed Internet connections, and one at 64 kbps for dial-up and slower connections.

Dictaphonia 2 is still available for purchase in its original microcassette format.

He's still accepting submissions, but they have to be submitted on microcassette. Anything good on your old answering machine?
Posted by Kurt at 15:23