Me interviewed on Fun 2 Know 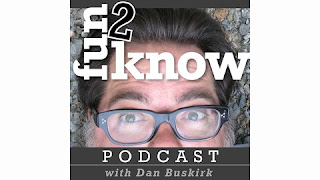 On a recent trip to Philadelphia, WPRB DJ Dan Buskirk invited me to be a guest on his Fun 2 Know podcast. He kindly and generously summed up our chat better than I could so I'll just quote him.

Conversation with writer, music journalist, WFMU DJ and record producer Kurt Gottschalk. Originally out of Illinois, Kurt's earned a masters at the Columbia School of Journalism in 1997. He has written about arts and politics for All About Jazz, Signal to Noise, Time Out-New York, The Village Voice, The Wire and publications in Canada, France, Germany, Ireland, Portugal and Russia. He has twice been recognized for "best feature writing" by the Connecticut Society of Professional Journalist. He also has hosted the Miniature Minotaur radio show on WFMU. He's also the author of two works of fiction, LITTLE APPLES: A STORY CYCLE and SENTENCES. Kurt's cover story on guitarist Loren Connor is the cover story of the June 2016 issue of the British magazine The Wire.

I became familiar with Kurt in the most modern of ways, a mutual Facebook friend neither of us really know saw our shared interests and recommended that we became Facebook friends. We both have avid interest in jazz music, 20th century rock and pop music and experimental sounds. We met for lunch about a year ago when Kurt was down from New York City for a Philadelphia trip and when we planned to meet up in early summer for a show from the Philadelphia chamber choir The Crossing I took the opportunity to sit Kurt down to record a conversation at the show kitchen table studio. We discuss Kurt's love of avant gardist Anthony Braxton as well as his record collecting roots, getting cheated by the Kiss Army, living in Chicago in the 90s, John Zorn's New York, Kurt's work with guitarist Loren Connors, the late Bernie Worrell and being visited by Prince in his dreams.


You can hear the whole episode here.