I'm pretty sure that's the headline for this piece on Bob Dylan I wrote for the Czech newspaper Lidovky, anyway. 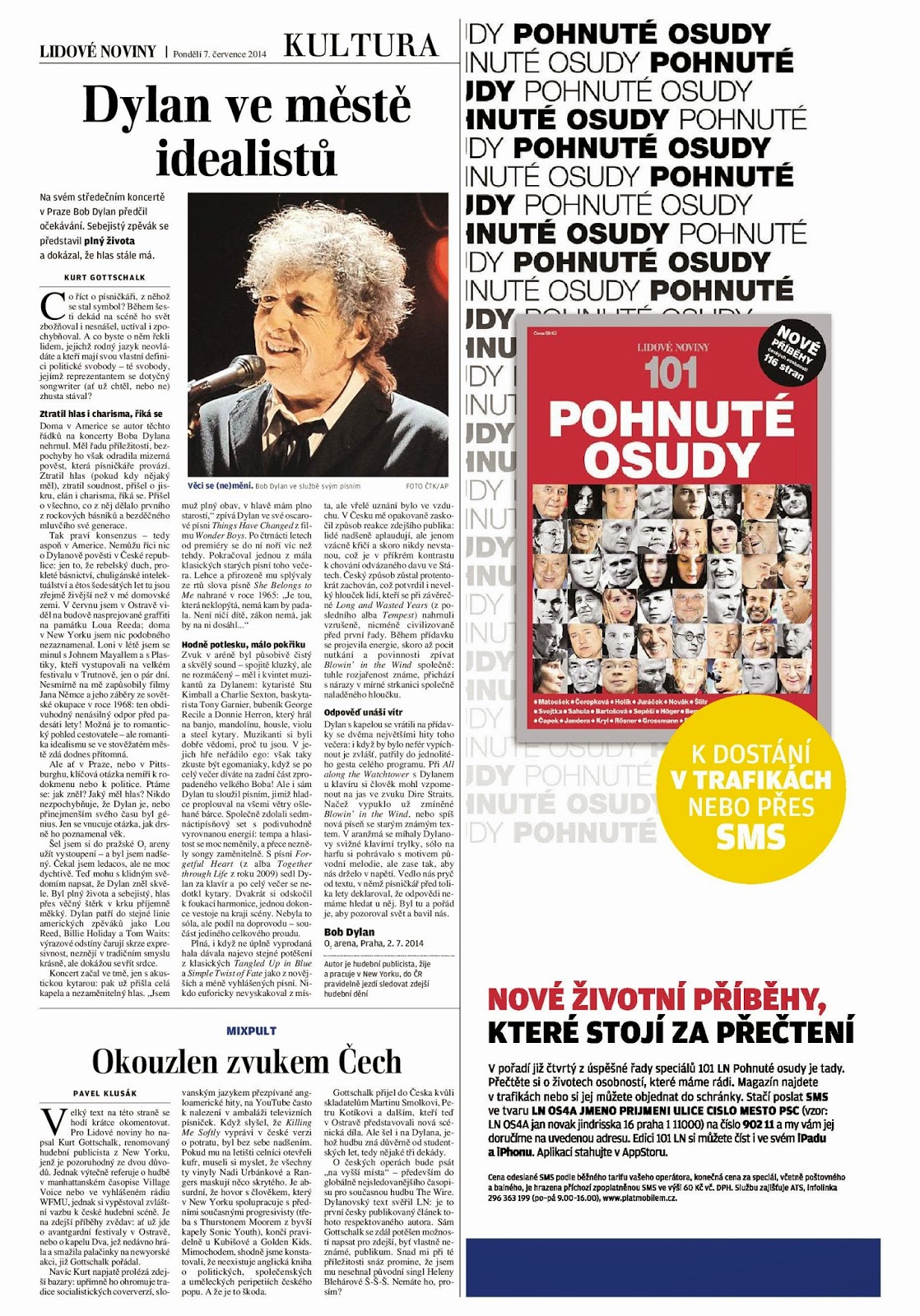 Here is the pre-edited text. It was shortened slightly for publication. Much thanks to Pavel Klusák for the opportunity.

What do you say about an iconic songwriter who over a career spanning six decades has been as adored and hated about as much as he's given reason to revere or question him? And what do you say when you don't speak the native tongue of the people for whom you're writing, a people who have their own definitions of the political freedoms that said songwriter – whether or not he wants it – is often seen to represent?

Despite being a Bob Dylan fan since discovering his music as an idealistic college student during the American neo-conservatism of the 1980s, I had never seen him in concert before attending his 2 July performance while visiting Prague. I had had plenty of opportunities but never seized them, dissuaded no doubt by how roundly his live shows are disparaged: He's lost his voice (or never had one to begin with), he's lost his mind, he's lost his passion, caring, charisma. Whatever he had that made him rock's first poet and the unwitting spokesman of a generation, according to consensus, he's lost it.

At least in America that's the consensus. I can't speak to his reputation in the Czech Republic, although I can say that the rebel spirit, the outspoken poet, the vagabond intellectual, the ethos of the 1960s, seems more alive here than in my home country. I saw Lou Reed memorial graffiti stenciled on buildings last month in Ostrava; I have not seen that in Reed's and my hometown of New York City. Last summer I missed seeing John Mayall and the Plastic People at the Trutnov Open Air Festival by just a couple of days. I have been impressed watching the films of Jan Němec and his footage of the 1968 Soviet invasion, seeing the brave acts of peaceful resistance of nearly 50 years ago. Maybe it's the romance of travel but the romance of idealism seems alive in the City of a Hundred Spires.

But whether in Prague or Peoria, the inevitable question isn't of politics or pedigree but “how did he sound?” Or more likely, “how did his voice sound?” The fact that he either is or at least once was a genius is never disputed. The question that wants asking is, “How has age ravaged him?”

I went to the O2 Arena to enjoy the show. I was excited. My mind was open but my eyes not too wide. And I will go on the record as saying that he sounded great: Animated and confident, smooth despite the gravel. Dylan is one in a line of American singers (including Reed, Billie Holiday and Tom Waits) for whom expressiveness is finesse, singers who will certainly elicit reactions, who might not sound pretty but who stir the heart.

The concert opened with a sole acoustic guitar in near darkness that led into a full-band shuffle and that unmistakable voice. “I'm a worried man, I got a worried mind” Dylan intoned, singing his Academy Award winning “Things Have Changed” from the film Wonder Boys in a rasp that has only deepened in the 14 years since the movie's release. He followed that up with one of the few “classic” songs of the night. The familiar lines of “She Belongs to Me” – “She never stumbles, she's got no place to fall / She's nobody's child, the law can't touch her at all” (from 1965's Bringing It All Back Home) – flowed easily from the the singer's mouth.

The sound in the arena was impressively clear and the quintet of musicians behind Dylan (guitarists Stu Kimball and Charlie Sexton, bassist Tony Barnier, drummer George Recile and Donnie Herron playing banjo, mandolin, violin, viola and pedal and lap steel guitars) sounded great; slippery but not sloppy, they were there to deliver. It wasn't about ego, and how could it be when you're looking at Bob freakin' Dylan's backside the whole time you're playing? But Dylan, too, was in service of the song, smooth sailing on a well-weathered vessel. Together they floated through the 17-song set with a remarkably steady flow of energy: tempi and volume didn't seem to change and yet the songs never sounded the same. Dylan started “Forgetful Heart,” (from the 2009 album Together Through Life) at the piano – he didn't play guitar the entire night – taking one harmonica interlude while seated and a second standing at the front of the stage. They weren't solos, they were added accompaniment, a part of the flow. The-full-if-not-quite-capacity audience was there with them, affording the same appreciation for “Tangled Up in Blue” and “Simple Twist of Fate” as they did more recent and less heralded songs. Not jumping-out-of-their-seats excitement but certainly an appreciative enthusiasm.

I have been stunned on more than a few occasions to see the way Czech audiences stay in their seats – applauding enthusiastically but rarely yelling and almost never standing, in stark contract to the excitable crowds back home. This held true, with only a handful of people wandering to the floor for a better look, until the opening chords of “Long and Wasted Years” (from 2012's Tempest, it was the last song before the encore) when the floodgates were opened and a rushed if civilized procession filled the aisles in front of the stage. There was an energy, almost an urgency, in the ensuing encore calls – someone even taking it upon himself to sing “Blowing in the Wind” – and the pursuant rush of exhilaration which (as we Americans know) comes from the bum rush, the thrill of the throng.

Dylan and band answered the encore call with the two biggest hits of the night – although to single them out as such would unfairly separate them from the unified flow of the whole of the program. With Dylan at the piano they delivered an arrangement of “All Along the Watchtower” with a gleam that called Dire Straits to mind. And then indeed they launched into “Blowing in the Wind,” or what might more properly be called a new song with the same lyrics, an arrangement underscored by Dylan's quick piano trills and featuring a harp solo – this time it was a solo – which drew the original melody out, teasing it just a little bit more, leaving behind the words that declared so many years ago (though no one seemed to notice) that it wasn't he who held the answers. He was, and is, here just to observe and entertain. 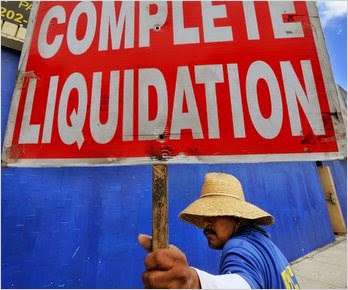 Because the shelves are falling down.

All items are in very good / like new condition unless marked otherwise. These are things I used, from my private collection. Discs may have slight scuffing. Books may have notes written on the blank / index pages at the end (not in the text though). Some may have punched UPC codes.

All items are $5 each unless marked otherwise.

All items are in good, gently used condition unless marked otherwise.

If you live in NYC we can try to meet in person (maybe spend the money on coffee instead of postage). Otherwise, contact me to put items on hold and to get shipping costs.

I will continue to add to this list. Write me at kcgottschalk @ gmail if you'd like to be notified of updates.

Decomposure - At Work and Unaffected (Unschooled, 2005)

Steve Lindeman with Byu Synthesis - The Day After Yesterday (Jazz Hang, 2013) upc punched on back

Mass Culture Control Bureau - Things From the Past (Ad Hoc)

The Westerlies - Wish the Children Would Come on Home: The Music of Wayne Horvitz (Songlines, 2014) UPC blacked out

Big Ass Truck - Who Let You In Here? (Peabody Records)

Merle Haggard and George Jones – A Taste of Yesterday's Wine (Epic, 1982) cover wear and mark from price tag on front

Waylon and Jessi – Leather and Lace (RCA, 1981) cover and vinyl almost like new

Waylon Jennings – Never Could Toe the Mark (RCA, 1984) cover and vinyl like new

Willie Nelson with Waylon Jennings – Take it to the Limit (Columbia, 1983)

Various – Country & Western Bulls-Eyes (Premiere) compilation with Tex Ritter, Vov Wills, Tex Williams and others, plus a full side of the Renfro Valley Pioneers

Tammy Wynette – Let's Get Together (Columbia, 1977) promo stamp on back

Laurie Anderson – The Interview from the Film Soundtrack to Home of the Brave (Warner Bros. 1986) 2 LP promo only, $10

Eli Good – Bride of the Bull (Feast or Famine)

Multiphonic Ensemble – King of May SubRosa, 1997)

Murmure – they were dreaming they were stones (Ground Fault, 2003)

Salaam – Train to Basra and Other Stories (self-released) sealed

Steve Swell's Nation of We – The Business of Here: Live at Roulette (Cadence, 2012)

Andrew King & Brown Sierra – The Kraken (Dais, 2009) like new, with insert, promo sticker on back

Graham Nash – Songs for Beginners (Atlantic, 1971) Shows its age but no scratches, record club sticker on back

Tommy Navarro and the Sundialers – Twist Around the Town (Urania, 1961) great condition, stereo, $45

Graham Parker and the Rumour – Stick to Me (Mercury, 1977) nice condition but someone (not me!) wrote a price on the cover in what looks like wax pencil. Stamps not included.

Rolling Stones, the – It's Only Rock'n'Roll (Rolling Stone, 1974) I dunno, I'm guessing Keef snorted up all the glue so they had to use Mick's saliva to put the covers together. Cover and picture sleeve are partially unglued but in good shape. Vinyl is clean.

Stones, the Rolling – Undercover (Rolling Stone, 1983) promo copy with stickers peeled off (not by me!), picture sleeve included, vinyl clean

Spit – You Would If You Loved Me (NTS, 1989) in cellophane with “John Peel hit” sticker, like new

The Beacons – Brooklyn Towne (Made in Brooklyn)

Mick Harvey – Sketches From the Book of the Dead (Mute, 2011) promo in color cardboard sleeve

Sergey Latincov – I Got You (Siberian Falcon, 1995) sealed

Toshi Reagon – I Be Your Water (self-released)

Various – We're a Happy Family: A Tribute to the Ramones (DVB/Columbia, 2003)

Special Disco Mixer - “Hollywood” two versions. Buy anything above and I'll give you this.

From the Banks of the Ganges: Sacred Chants of Shiva (Heaven on Earth, 1997)

Bleeding Through – Wolves Among Sheep (live and studio footage from 2005, in one of those stupid hinged cases so the inserts won't fit into regular snapcases)

The Clash – Westway to the World: Director's Cut (Great doc by Don Letts)

Isis – Clearing the Eye (live clips and videos from 2006)

Mono – The Sky Remains the Same as Ever (110 minute documentary, live and studio footage in nice cardboard case with cardboard outer sleeve that I splattered coffee on)

TV Sheriff and the Trailbuddies – Not 4 $ale (Wacked out “video band” from LA – sampling, collage, karaoke and mind control)

Turisas: A Finnish Summer With Turisas (metal band camping under the midnight sun, really enjoyable doc even if you're not a fan of the band)

Vader: And Blood Was Shed in Warsaw (2007 concert)

Various – Down From the Mountain (Concert film supporting “O Brother Where Art Thou” with the Fairfield Four, John Hartford, Emmylou Harris, Allison Krauss, Ralph Stanley, Gillian Welch and others)

The Who – Who's Better, Who's Best (20 tracks of live / TV footage and promo clips, from “My Generation” to “Eminence Front” in nice, slim cardboard case.

Tenacious D in The Pick of Destiny – Worth it for the Dio intro alone.

To the Limit: The Untold Story of the Eagles by Marc Eliot (hardcover)

Possessed: The Rise and Fall of Prince by Alex Hahn (2003, hardcover)