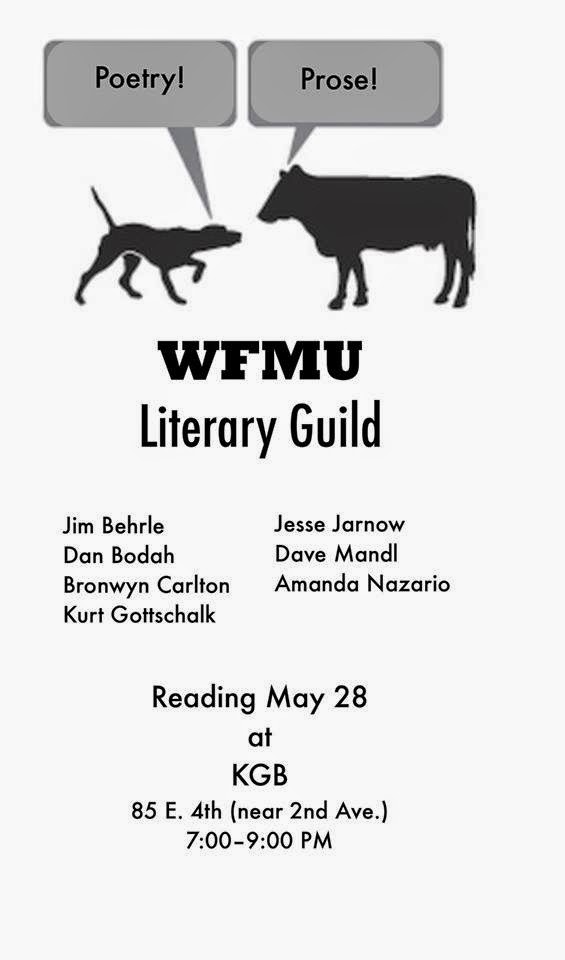 I've uploaded a few selections from my in-progress collection of holiday stories to my Lulu shop. "The Audiocalypse Project" is by far the longest in the collection, probably maybe technically a novella. "Why Do We Scream at Each Other? Letters to Prince" spans from Prince's birthday (June 7) to New Year's Eve and acknowledges that as a Jehovah's Witness he himself probably doesn't celebrate holidays. I've also reposted "Reading Genomes," the Father's Day entry in the collection.

I'll also be reading from the Prince letters this Wednesday at KGB with six of my fellow WFMU writers and on-air personalities. Please see the flyer over there or check out the Facebook event.

Also, on Saturday the 31st I'll be doing an improv guitar duo with Robert Hardin at Charles Lear's studio on Thames as part of the Bushwick Open Studios. Not sure what time but hopefully not too early since I'll be at theWFMU Record Fair all day and all weekend (broadcasting live there on Friday and selling on Sunday).

Happy Memorial Day!
Posted by Kurt at 19:27 No comments:

May is National Drinking Water Month - Here's how I'll be celebrating.

Now when I first saw this, I read “drinking” as a verb, and thought we should all be drinking water all month, which wouldn't be a bad idea. But then I realized it was probably an adjective and that the month had likely been designated for some sort of campaign about the water we drink, most likely in terms of cleanliness. I didn't really look into it further, I just figured that made sense. But then I thought, well, if we're concerned about the cleanliness of the water we drink, it's because we're drinking it, right? So it is about the act of drinking water and so it's kind of the same thing either way, right? It's like it's drinking drinking water month. Nationally.

I spent a little while trying to think of a good water song to include and settled on this one. Maybe not the wateriest, but I really do love it.


Of course, it could have been reconfigured so “drinking” would be a gerund which would have been totally hot. But enough about that. May is also a month where I'll be publishing, self-publishing and reading stories. Probably writing some, too. And telling some jokes. Here's how it goes:

My story “Present Tense,” from my book Little Apples has been included in the new issue ofA Gathering of the Tribes. I was glad to see it come out since Tribes has fallen on hard and then harder times. Check out their website and if you have a way to help them out, do.

On May 14 I will be a part of a night of stand-up comedy by people who have never done stand-up comedy. Andrew Singer contacts people who have never done comedy on stage before and cajoles them relentlessly until they buckle and agree to give it a try. Soce's First-Time Stand-Up is at the Sidewalk Cafe starting at 8 pm. I think it's free with a drink minimum. I'll be having a drink minimum in any event.

And on May 28 I will be reading at KGB Bar with six of my fellow WFMU radio hosts. Thanks to Dan Bodah for organizing it. Also reading (along with Dan) will be Amanda Nazario, Dave Mandl and Bronwyn C and Jim the Poet. This one I know is free with a minimum, from 7-9. O'clock, not drinks. My plan at the moment is to read selections from my unpublished workWhy Do We Scream at Each Other: Letters to Prince. Around that time I'll be putting the whole text up on Lulu, as well as my novella The Audiocalypse Project. Both are included in the in-progress collection of holiday stories which sometimes get posted to Lulu for short and at seasonally-appropriate times of year. And now through May 11 you can get 10% either of my books or digital versions of my Easter story “A Bag of Doughnuts” or the script for my play Under a Scar-Filled Sky: The Buddy Zinn Mysteries at Lulu by using the coupon code MOM10 (all caps) at checkout.

In nonfiction opining and postulating, I have been talking about Paul McCartney and Wings all week over at One Week // One Band. Today I'm on about Wings Over America, Thrillington and the beginning of the end before wrapping it all up tomorrow. Here's a Spotify playlist to carry you along.